"That of having our own organic mill has always been one of my father Gino's dreams": these are the words pronounced last year by Giovanni Battista Girolomoni, son of Gino and president of the Marche region cooperative, in the days of signing the contract for the construction of the organic mill. A little over a month ago, "the dream" was started and then tested with great joy and satisfaction by the Cooperativa Gino Girolomoni and Ocrim, to whom the company entrusted all the work.

Isola del Piano (PU – Italy) – last September 2, at the Girolomoni company, the 100 T/24h organic mill was tested. It allows the cooperative to produce semolina obtained from organic grains and cereals, such as durum wheat, spelt, Senatore Cappelli, Graziella RA and others. The semolina is intended to feed the pasta factory located in the same company, thus closing the desired circle of the supply chain. A ring that was missing and that the members of the Cooperativa Gino Girolomoni were able to complete thanks to the support of Ocrim.

The mill is made up of Ocrim's most noble and innovative machines. There is a high level of automation that guarantees the traceability of all productions, thanks to the @mill package. 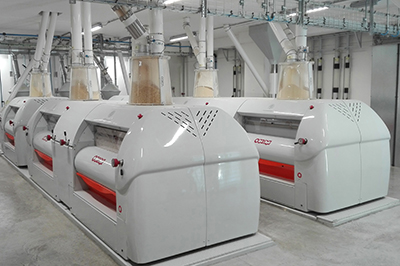 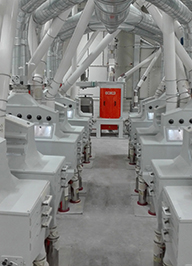 Ocrim, for Girolomoni, was a complete supplier, from the mill design to final testing. The Ocrim team has trained the technicians and millers of the Marche region cooperative at its historic site in Cremona, continuing with on-site training at the Girolomoni site during the start-up and testing phases of the mill.

"For me and for the whole Ocrim family it is an honor to have taken part in the realization of the ‘dream’, the mill desired by Gino Girolomoni, a man who had gratitude and love for the Earth, the Work, and the Family. His sons are concrete heirs of these values and I am happy to have contributed to the fulfillment of this important venture". Alberto Antolini expressed the words mentioned above in an interview during the event "Wheat, flour and ...", held on 14 and 15 September (2019), in which Giovanni Battista Girolomoni also took part, bringing his own testimony and telling the audience the constructive and profound relationship that links Girolomoni to Ocrim.
The two companies have always looked in the same direction. Both have great respect for tradition and trust in the benefits of technology.

The dream of Gino Girolomoni, thanks to the tenacity and diligence of many people who believed in the same goal, could only have a successful conclusion.