The technical day brought together the institutions, the academic and the scientific worlds. A day full of exchange and knowledge. The participation of speakers who were skilled and clear in their explanations was key. In the evening we gathered at the Ocrim site for an aperitif and dinner which will be long remembered.

More than two hundred guests arrived early in the day at Ocrim’s historical site in via Massarotti for an intense and productive conference day. The conference covered topics on corn, wheat and legumes. Quite uncommon topics, such as legumes, or topics covered in an unconventional manner, yet strictly pertinent, given the increasing presence on the market of alternative flours, for example. The conference day was presented and moderated by Marino Scarlino, Former Professor at the Istituto Arte Bianc


Sergio Antolini, President of Ocrim, was the first to take the podium and welcome a large crowd, giving a friendly message yet with the intention of providing the results achieved in recent years and the objectives set for the future. An excursus, that was also told though the video screened behind him, of the Ocrim company that experienced great changes which proved to be helpful in strengthening it and making it the solid and versatile company it is today. 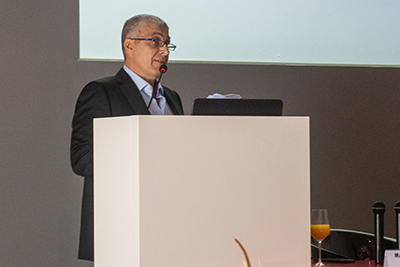 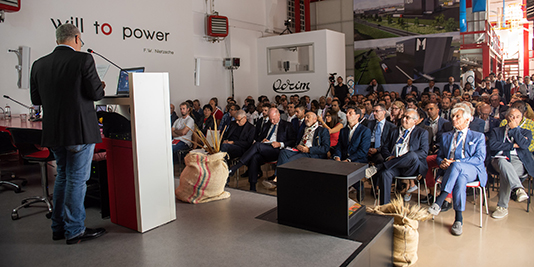 Then Gianluca Lelli spoke, national Head of the economic area of Coldiretti, underlining the importance of the national and international market of a company such as Ocrim, as it interacts constantly and proactively with many other businesses connected to the world of Coldiretti. “Businesses such as Ocrim are crucial to enriching the engineering and innovation aspects intended for the farming industry as well. Concretely involving the Cremona-based company in the farming industry led to tangible and positive results, and I, as the national head of the economic area of Coldiretti, am pleased to be one of the witnesses and spokesperson”.
Federico Vecchioni, CEO of Bonifiche Ferraresi provided a financial and political overview of the Italian and European economy, to an international audience. He underlined the importance of the alliance between Ocrim and Bonifiche Ferraresi, defining it as “a journey that continues along the lines of growth and investments”. He then continued by stating that “The future happens through innovation, technology and human resources. We have the task of explaining our projects to the financial market, which we expect to be stimulated and supported by”. Federico Vecchioni invited numerous entrepreneurs attending the conference to do the same, i.e. create a dialogue, join together, support each other, creating new alliances, helpful for themselves and for the economy of their countries.
Following Federico Vecchioni’s speech the Mayor of Cremona, Gianluca Galimberti, said a few important words before the beginning of the technical day. He welcomed the audience and the Ocrim family, which are dear to him and the city because of the significant economic, social and cultural contribution that the company provides. 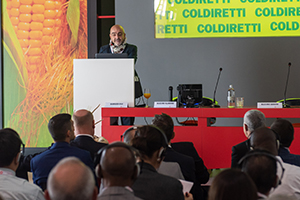 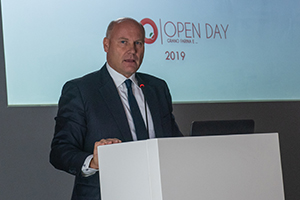 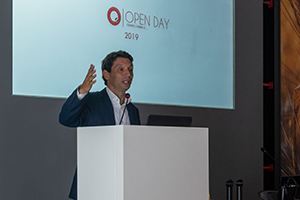 Following the welcome of the owners and institutions, Marino Scarlino presented the day and its content and invited the first three speakers to the podium for the first part of the conference day, with the macro topic of “Corn: farming, properties and use”. Massimo Blandino, Researcher at the University of Turin, presented his paper on “The supply chain of food-grade corn: innovations and changes in the last 20 years”, while Marco Galli, Head of the technologies department at Ocrim, spoke of “Corn processing methods”. Lastly, Massimo Arduini and Rodrigo Ariceaga, respectively CEO and US Sales Manager for the Bologna-based company Molitecnica S.r.l., discussed “Nixtamalized flour and its uses”. A few months ago Ocrim and Molitecnica signed an important agreement for the construction of production plants of this special flour, which is suitable for tortillas, a product that is increasingly appreciated across the globe (and not only Central and South America). 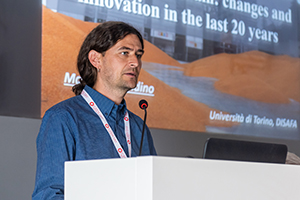 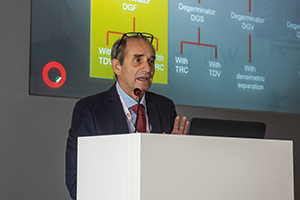 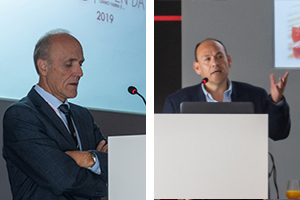 The second part of the technical day covered the topic of “Grains and legumes: their genetics, varieties, world productions and ancient grains”. Matteo Piombino, Marketing Manager of Pioneer Hi-Bred Italia presented his paper on “Corn and opportunities in the supply chain - giving value to productions while fulfilling market demands”. Next, Stefano Ravaglia, Manager of the Research and Experimentation department of SIS (Società Italiana Sementi - Italian Seed Society) gave a speech on “The food supply chain, the contribution of varietal innovation”. 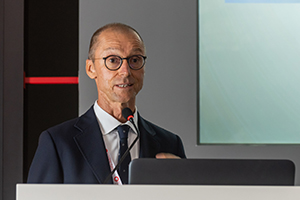 After a lunch served in the company courtyard, with a menu based on the products discussed during the conference, the third and last part of the technical day was held. Fabio Talamo, Sales Manager at Vomm Impianti e Processi S.p.A., gave a speech on “Flour heat treatments”, a lengthy presentation that sparked great interest and questions from the audience. Then Fabrizio Baccinelli, Sales Manager at Ocrim, took the podium, and gave a complete and concrete view of “The production of special flours and trends in the world market.” The last speech of the technical day was given by Simona Digiuni, Biotechnologist at the Ocrim laboratory, with her presentation on “Varieties of flours and their nutritional properties”.
At the end of the technical day Marino Scarlino invited all of the speakers up to the stage to answer the many questions from the audience, leading to a constructive debate. 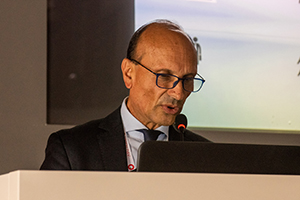 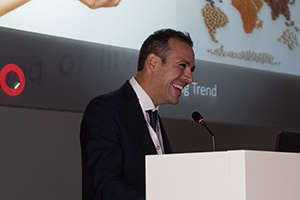 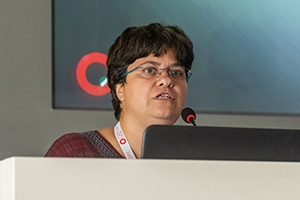 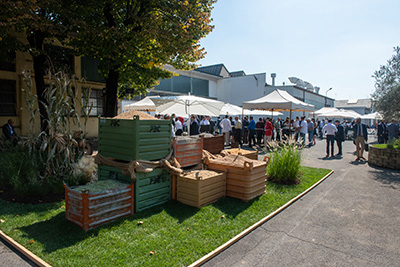 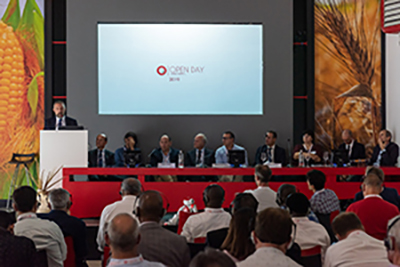 The dinner And the event continued into the evening. A special and unrivalled dinner was served in the historical assembly department of the Ocrim site. A place where we breathe the work spirit every day. A place where everything is a reminder of the human, intellectual and physical commitment of the workers. A department that is normally occupied by “working heads”, but on this occasion was transformed into an enchanting location set up as a bona fide gala dinner.
A table more than 70 meters long set for the more than 200 guests in attendance. The guests were seated at this table with settings created with the raw materials discussed during the technical day The dishes followed the same theme: a menu based entirely on the products discussed since the morning sessions.
Once the guests were seated at the table they received a pleasant and meaningful surprise: a young singer gave a touching performance of the national anthem, appreciated by all. This spontaneous initiative conveyed a clear message of the Cremona-based company’s pride in being Italian, Italian in the sense of belonging and also modus lavorandi.
Over the course of the meal a live call was made to the United States, Mendota to be exact, where Ocrim installed 3 grinding sections with an overall capacity of 1800 T/24h (600 T/24H each). One of the Ocrim team workers, live from Mendota, told and showed what was happening in one of the three mills, the last to be implemented. It was possible to hear and see the rollermills in operation as well as the first flour. It was a thrill, for the guests as well as the gentleman on the other side of the screen...and the world.
With dinner almost at an end, the Ocrim 2019 video was played on the screen of the backstage. The preview showed the involvement of the Ocrim team in preparing the company video. It is our duty to underline the practical and emotional commitment, as it is also driven by the desire to convey it to the people who interact with Ocrim as customers or friends. 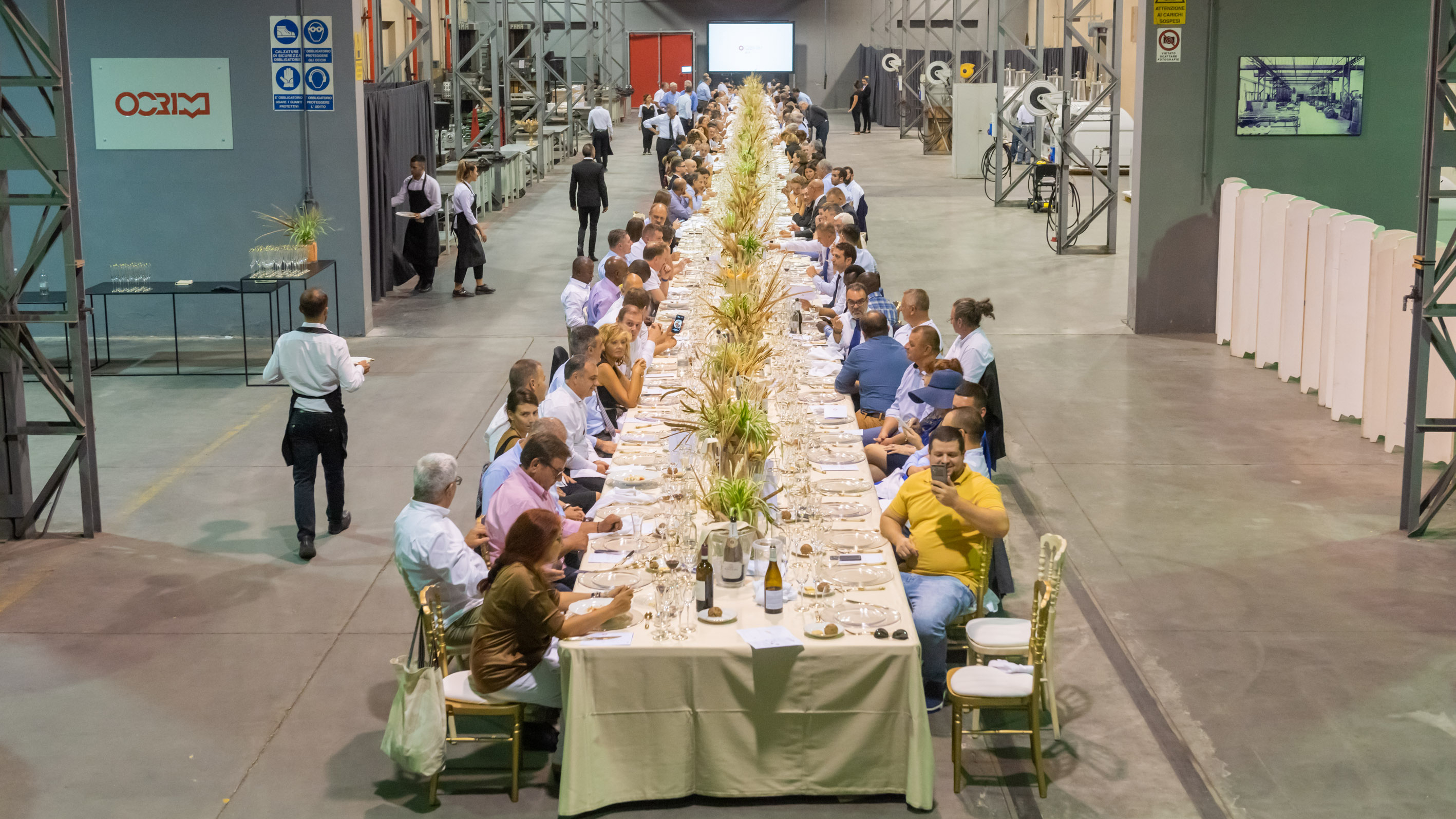 Organising an event of this caliber was no easy task. It seemed to be a “mission impossible”. However tiring, it was completely worth it to see the expression on the faces of the attendees, dumbfounded by such magnificence, in a work site.